Kata, Alice and Bea, together with seven other volunteers, took part in European Solidarity Corps project, Project Friendship. Project was a three week long project, held in Villa Elba in March 2020. Aim was to organise friendship themed workshops around the Kokkola City, in schools, workshops and service houses. Unfortunately during the project the corona situation broke out, and they only could organise one workshop. But anyway they got to learn and experience living in a new culture and taking part in a solidarity project. 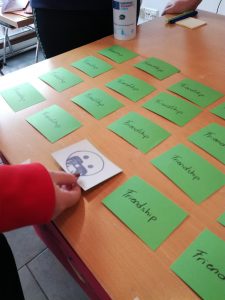 They decided to take part in the project mostly because they wanted to know how is life and living here in Finland. They were curious to know how finish people live here. Also the topic of the project was interesting, with all the workshops in different places.

”Confidence. I traveled for the first time alone. And I also improved the ability to work in teams.” – Alice

”I got a lot of friends an I had a lot of good leaders from who I got to learn, for example how to behave with the children and how to make a presentation with energy” – Bea.

Living in a different culture was not so challenging that they had thought.

”There were not so many strong differences. The most challenging thing was to convince someone not to put ketchup in a pizza”- Alice

”The language was most challenging for me. Everybody had a different accent and it was difficult, especially at the first week” – Kata

Funniest and wierdest things they found out when living in Finland was ice swimming and food. In the end they think they learned and experienced things that can be useful in their future.

”I think that the experience contributes to my personal developing, and I think that I will realise all the things I learned later on” -Alice

”I think I use the things I learned here in my personal life. After the workshop we had with young people, I felt that I could do this as a job. I would maybe want an occupasion with children or for example a team leader. But I can maybe also use this experience when I finish my studies as an organiser.” Bea