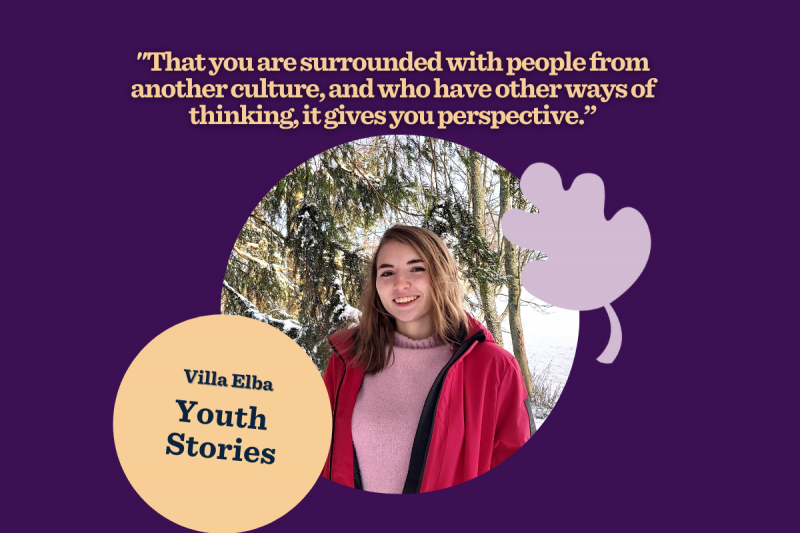 We have been lucky to host a volunteer Varvara from February until end of the year. Varvara comes from Russia, Siberia. She has a Bachelor degree on International Relations with the focus on Europe cooperation, so she was a perfect fit to our International Youth Centre. You can read on Varvara’s first impression from Finland from here.

But now it is time look little bit back about her journey here..

Varvara’s story in Villa Elba begun already in 2020 January when she took part in a Erasmus+ training course Good leadership – succesfull youth exchange. We remember a lively group of youth leaders. Among them Varvara with her big smile and always so polite and active: ”My first impression of Elba was on that training course and then i fell in love in Elba. I immediately realised I will definately want to do more international projects. I really liked how the stucture of the programme was build and how leaders were interacting with the group. I wanted to know more how you work and how its functioning from the inside. That is why I applied here as a volunteer, when i noticed that there was  volunteering position available. Actually at the time I was mainly looking position from German speaking country, but luckily I heard from Villa Elba and Finland chose me.”

Varvara started her journey to volunteer here from St.Petersburg in February 2020: ” I remember in St.Petersburg there was no snow. When I arrived to Villa Elba there was lot of snow here and that made me so happy, I felt like a kid again! Now it is again snowy and I really like it ” 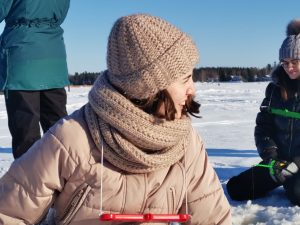 In the beginning Varvara worked mostly with different kind of groups, from nature school groups to international groups. Big part of the work at the beginning was to help with International Mono-cafe. Mono-cafe welcomed people to Villa Elba while their cross-country skiing trips, and encouraged them to interact with our international volunteers. After winter time Varvara helped with summer camps, and during the autumn more with international deparment and with social media.

– That is something I have learned here

”When I look back in all these months i have done so many things. I feel like I have been helping everywhere, and it has been nice. I remember when we were working with third graders who were visiting here and I was trying to talk english with them. It was really hard because they didn’t really speak english. But one boy wrote in the feedback that he really enjoyed that he could speak english with me. That was super nice, I almost cried. And also other times when I have gotten positive feedback it has felt nice. In Russia it is not so common to ask and receive feedback. That is something that I have learned here. I also have been active to ask questions from the coworkes that how they are doing different things to learn more.

I was really proud of myself after summer camps when at the end the kids where telling how they really enjoyed the camp. At the camp I was helping leaders, facilitating and doing games, and helping what ever there was to do. There were couple of moments during the camp that I think I really succeeded. For example when kids in the group where playing something and few of them were not taking part, but I was able to encourage them to take part. I’ve learned that I really enjoy youth work, and after all these months this is something I would like to continue”

During her volunteering period here Varvara has been living in our seaside cottage called Merikeskus.

”Living in another country has also had it’s challenges. I have had to build my life here in a new place. At the beginning it was hard with the language and not knowing anyone. I had to find people to spend time with but I managed to do it. I just had to be active and go and talk to people and try to find common interest, hobbies and activities. I think it is important that you should also initiate, not just follow. Not to be afraid to talk to people and invite them to do stuff.”

Varvara has been actively taking part in all the opportunities that has come across: ”I’ve done so many thing I can’t even remember. But one thing that I did here that I had not done before was kayaking. I really enjoyed it. I had a change to try it with one group we had here. It was amazing. It felt like freedom, that you can go where ever you want. I tried both single and douple kayak. I liked more the couple kayak as it works as a good team building and getting to know each other exercise.”

At times there has come up weird and funny situations. Our famous team building programme squirrel adventure came as a suprise for Varvara at the beginning: ”Quite at the beginnig of my volunteering I was asked to dress as a squirrel for the team building programme. That was so weird, but in the end it was so fun. Another fun moment was when Villa Elbas chefs singed karaoke, I will remember that forever” 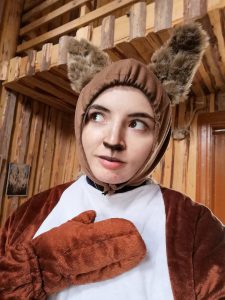 – I just feel happier in general

When we are doing this interview with Varvara there is  only one month left of her volunteering project. She feels that she has gained a lot, although there is still something to learn more. ”During this one month that I have left here I would still like to learn more practical things about how to plan international project. But so far I’ve gained a lot! First of all self-confidence. When I came I was shy and did not know my abilities. I knew I had some abilities, but was not sure about my self. I’ve also learned a lot how to communicate with others and how to work together. I also learned a lot about youth work.

It is so many things that has happened. I feel I am a totally different person than when i started. I just feel happier in general.

I think it is because the new environment, new people, new things that you try and see and all of this together. But also that you are surrounded with different persons around you from another culture, and who have other ways of thinking, it gives you perspective.”

Thank you Varvara! We are looking forward to see you in the field of international youth work also in the future.